This month we re-join Craig as he takes us on another foraging adventure, this time leaving the city streets behind and heading to the secret pantry on offer in our local woods.  Pictures by Kate Holden

In my previous post – Herbs of the Highstreet – I discussed some of the edibles you could find in urban areas, and with that done it seemed natural to move out of the city and explore a new environment. In this case, the mature deciduous woodland of Stanmer Park. It was a wet one when me and friend Kate took an excursion into the Great Wood to seek out and scavenge about.

While you might imagine late summer and early autumn to be the best time to forage due to the wide variety of fruits on offer, the spring/summer period is certainly the best for vegetables and herbs. Here’s a little breakdown of some of the things we found along with some tips on cooking and identification, and some of the things you might keep a lookout for when next ambling along woodland paths.

You wouldn’t want to eat this one raw as you’d end up with a sore throat, but if steamed for a few minutes, it will make a surprisingly substantial vegetable that can be eaten in the same way as spring greens. I once boiled a load up and then added them to a savoury batter to make fritters. They held up nicely and give the fritters a more interesting texture. As well as it’s other names, it is also sometimes called ‘poor man’s asparagus’ and I can see some superficial similarity, but sticky-willy is nowhere near as robust as asparagus, nor as flavoursome. However, for something so common and so inedible-looking, it’s a great one to have in your foraging vocabulary.  (See also Ruby’s Clever and Nettle Tonic – Ed).

This next one is perhaps one of my favourite herb/salad vegetables to be found in wild and ruderal places. Jack-By-The-Hedge is in the mustard family, but is the culinary cousin of Ramsons, or Wild Garlic. Yes, that’s right, it’s garlicy. However, its taste is not just garlicy, but there’s often a hot bitter tang at the end that’s akin to eating dandelion leaves. In general, you can use it as you would raw chicory. As it has such a strong flavour, you can also use it as a herb, and it’s great when finely cut and added to a soup just before serving (it will wilt as spinach does).

It is also fairly easy to spot (as the name suggests: frequently by/in hedges) and has distinctive heart-shaped leaves that are ridged with shallow lobes. It might take you a little bit of looking before you happen upon it, but you’ll soon find that it’s fairly abundant once you get your eye in. If you were feeling adventurous, it’s possible to collect a lot of it quickly, so you might even try a ‘Jack’ pesto, using sunflower and pumpkin seeds to stand in for the pine-nuts.

You’re likely to already know about this, due to the popularity of elderflower cordial and the use of elderflower in some ales (Dark Star used to do a nice Elderflower Pale Ale). The elder tree is itself a real forager’s friend, giving us flowers in the spring/summer, berries in the autumn and being susceptible to the edible and distinctive Jelly Ear fungus (which I will cover in a future post). 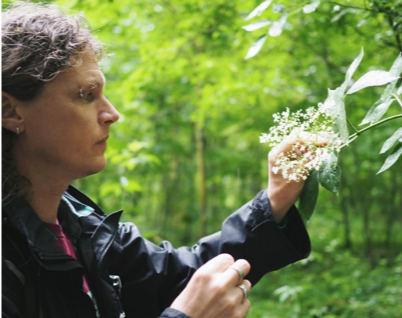 As well as munching them as you find them, I also make elderflower pancakes. Making sure to chop the flowers very finely, added to a thin batter they lift a regular pancake with a pervasive floral edge, and you really don’t need much to achieve the effect (3-4 flower heads will do).

So, there’s three things to look out for, but there’s always much more to explore and much more to eat! Next time, I’ll be moving into meadows of Wild Park to hopefully find some snacks and ingredients.

Craig Jordan-Baker has been a forager of urban and wild spaces for about ten years, even foraging for nibbleable nuggets for a restaurant to mix into marvellous meals. Please ensure you follow responsible foraging guidelines when you’re out and about foraging. Check out the Woodland Trust’s guidelines.

View all posts by Jenni Cresswell